Ingrid has announced to the board that she wishes to resign as CEO at Stiftelsen Stockholms studentbostäder, SSSB, in order to instead assume the role of CEO of Stockholm’s Cooperative Housing Association, SKB. Ingrid has held the role of CEO for seven years and will continue in her current role for six months.

– During her time at SSSB, Ingrid has developed the company in an exemplary way and I want to say a big thank you and at the same time wish Ingrid good luck in the future, says Leif Garph, Chairman of the Board of Stockholms studentbostäder. 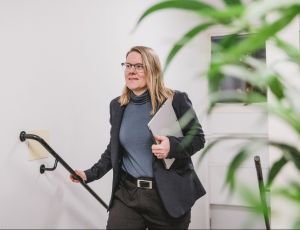 SSSB is a fantastic company that I have had seven wonderful years in. I will miss both the students and of course all employees, but I am also looking forward to new exciting challenges. Stockholms studentbostäder is a stable company with good values and competent employees. I am absolutely sure that the company will continue its positive development in the future, says Ingrid Gyllfors.

The work of appointing a successor to Ingrid will now begin.